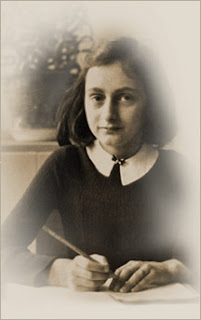 "Whoever is happy will make others happy too. He who has courage and faith will never perish in misery!"

"I still believe, in spite of everything, that people are still truly good at heart"

(excerpts from The Diary of a Young Girl)

Today is Anne Frank"s birthday ( Jun 12, 1929). Some of you may be wondering who she is. Apart from everything said about her by others and by her too, she represents the power of a liberated mind, a sacred thought and the ultimate perseverance of human heart on the face of mortal danger.

The two most defining personalities of the WW-II were in absolute contrast toeach other. At the one end was Anne a common yet so uncommon teenager and at the other end was Hitler. Both penned autobiographical memoirs. Both of them talked about their lives and beliefs. But unexpectedly it was Anne's that prevailed. With a diary written while hidden in a secret attic with her family, she braved the Nazis and lent a voice to the fight for human dignity.

This historical document holds such immense value in today's world that any doubt cast upon the authenticity of these memoirs are considered nothing less than profanity by many. As Roger Rosenblatt, noted journalist says, "there are some stories the world so needs to believe that it would be profane to impair their influence”.

It's really a wonder how a book, basically a diary, written by a person between the age of thirteen to fifteen evokes so much interest that it remains no longer a mere book. Anne through the pages of her diary has transcended all barriers of cast, creed, race or religion. She is no longer a mere Jew or a victim of holocaust, she is much more than that, an eternal sense of perseverance, and eternal hope on the face of abject despondence. Every word of hers is full of hope and a jest for life. One year before her death from typhus in the Bergen-Belsen concentration camp at the mere age of sixteen (actually less than sixteen), she wrote, "I want to be useful or give pleasure to people around me who yet don"t really know me. I want to go on living even after my death!". Useful she did become, and immortal too through the pages of her diary.

If you have ever been a teenager (which you have surely been), then you will certainly be able to connect to all the trepidations and self-doubts that you see in the pages of this epic. And do not forget all these under the constant fear of being found out by the Nazis. As someone correctly said this book is one of the most conclusive and moving evidence of the shocking pogrom perpetrated on any race in the name of creating a superior race.

On August 4, 1944, the Gestapo discovered the hiding place of the Frank family after being tipped off by an anonymous Dutch caller. The Gestapo found them hidden behind a door protected by a book case. They arrested Anne the human being. But they could never fathom that Anne had already escaped through her diary.

Good review...Well written.
Tempts me to pick up the book.
Would have forced me to pick the book if you had tempted me with some parts that you found interesting.

I am sure by now you are through with the book. I tried to read it from a 14 year old teenager's perspective and found every word, every phrase so mesmerizing that it would have been difficult to pick a few snippets.

But thanks for your suggestion. I will try to follow it the next time I write any book review.

Anjan
Bangalore / Nai Dilli, South n North, India
Sea shore, the breeze brushing my hairs, the sea wind bringing with it the music of some distant land. A dream ...may be...but definition of absolute peace...always yearning for that. And colors...yes lots of it around me. Sometimes through a plain glass, sometime through a prism....to enjoy the beauty...the rainbow...the colors of life.